Nadia Murad and the UN!

The United Nations have appointed our Kurdish Êzîdî girl, who escaped from the barbaric hands of ISIS (Daesh), to be a Goodwill Ambassador. I for my part, as a Kurd, am looking doleful at this gesture, and therefore I cannot thank the UN wholeheartedly. Because with this act, the UN only appeases their own conscience. If they claim to be a Union of Nations, why is there not one single representative for a 50 million people, the nation of the Kurds? What kind of United Nations Organization is this?

The UN was founded on Oct. 24. 1945, today there are 193 member states of the organization. Before that, there was the League of Nations, created Jan. 10. 1920, with 55 member states. Plenty of articles in Charta and resolutions talk about justness, law and justice. Has anyone ever applied those articles to the Kurds? Since the First World War the Kurds suffer under the three nations of Turks, Persians, and Arabs. One example: in the year 1988 alone, 200.000 Kurds have been killed under the operation “Anfal”. Today, that is known as the Genocide of Halabja.

The Baath regime violated the honor of thousands of Kurdish women. So did the Turkish, Iranian, and Syrian state.

How is that possible that we exist but at the same time we don’t?
How come that we exist, however our name is nowhere to be found, not in one book, not in one law? Truth be told, in the 1920s the imperialistic nations have sacrificed us for the sake of oil in the Middle East, hence left us without a state and without a status. That is why all those atrocities always happen to our Nadias!

So, while you declare Nadia an Ambassador of Goodwill, why don’t you turn towards the condition of Nadia’s people and Nadia’s homeland?! Who brought all the misery upon us, why do we remain under the oppression from the Turks, Persians, and Arabs?

Who is supporting them in their oppression of the Kurds?

On the other hand, there are a couple of million Kurds in Western countries: in Europe, the United States, Canada etc. who speak the local languages. Why don’t they bring forward a motion for the rights of the Kurds, commemorating the condition of our people, saying “Hey, United Nations! This disgrace happens because of your negligence towards us!

Alas, what shall I say, what not? To whom shall I address, to whom not? 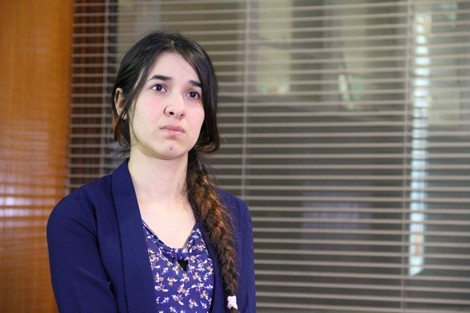